Prince Murder Update Jan 24 2017
I had another light channeling session with Prince yesterday morning. I’d considered attending the public opening of his home Paisley Park, in Minneapolis, scheduled in April and wanted to ask Prince if he thought it was a good idea.

For some reason, I also asked if his murderer ( in our first session together about two weeks ago he said he had been murdered, so that was no longer a question) would be at Paisley Park during the public event.

Prince’s soul image appeared over my left shoulder and the other images he (and my own guides) were sending came forward from the center of my third eye.

ME: “Will the person who murdered you be at the event?

I saw a long, winding, stream of black and white dominos that originated in the past and were completed in the present. They started to fall forward until they arrived at the feet of a single white male. The last domino fell at his feet –the murderer. He was someone close to Prince at the time of his death last April. The man was young–maybe thirty–light dark hair (I’d heard another psychic say Princes was murdered by his chef). Above this man’s head were three other people– a female –(she was the clearest image and the most powerful) and two males aside of her who were dim (which meant they were less important).

The murder was a conspiracy of three higher ups (who had a female leader) which lead to a domino effect of circumstances, which lead to the one single male who did the dirty work. 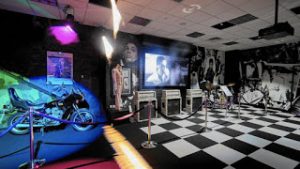 Murders, especially assassinations ( and particularly by the Illuminati) of public figures (like Prince) are often planned many years ahead of the actual event. The long line of dominoes, the perfect orchestration of them, and then the man at the end, were strong metaphors for a long, detailed, perfectly organized crime.

The manner of his death is important to Prince. Not only does he want it reconciled for his benefit, but because assassinations are happening to other people–such as JFK, MLK, Michael Jackson, Tupac, Princess D, Malcolm X, and on and on–by the same shadow government, often referred to as the Illuminati.

The murderer would be at the gathering at Paisley Park. I saw him amidst the crowd (in the psychic images) but I wasn’t sure if Prince felt it was important for me to be there–I’ll check in later about that and keep you updated.

Prince projected many more images of how people could heal with color and food and I will include that in my next post.

In peace and love, Bethesda Star.